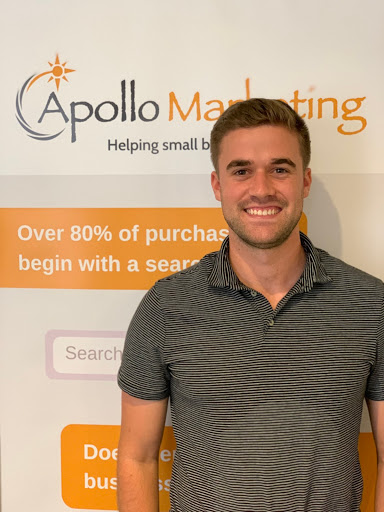 Today, we’re introducing our Lead Generation Strategist Colin Viti! He’s been working with the Apollo team for over a year now, and here’s what he had to say about his experience so far:

Tell Us A Little Bit About Yourself:

My name is Colin Viti, I’m from Thurmont, MD and I’ve lived in Frederick County my whole life. I’m 24 years old and I have a bachelor’s degree in Integrated Marketing & Communications with a minor in Psychology from Hood College. I was also a college athlete during my time at Hood as a member of the men’s soccer program. I enjoy watching and keeping up with pretty much all sports, with my big three being the NBA, all types of soccer, and the NFL. My other hobbies include coaching soccer, exercising, riding my bike, playing video games, and hanging out with my friends.

What made you interested in the world of marketing?

I think the prospect of potentially finding a work environment where I could be myself and utilize those strengths to help other businesses succeed was what initially enticed me. I’ve always been someone who thinks well on my feet and have been in tune with how people perceive the world around them. The marketing world seemed like a place where I could take these innate qualities and use them in a career path that had the opportunity for both sustainability and fulfillment.

I love working in Downtown Frederick. As a lot of people already know, Downtown Frederick is an awesome place to visit and hang out around, so getting to spend large portions of my day in the middle of it all is really enjoyable. For me there are two big perks, one is lunch breaks and two is the close proximity to where I live. Most days I just ride my bike to work through Baker Park which is super convenient.

What’s your favorite part about the local campus of Hood College?

I went to Hood from 2013-2017 and a few things about the campus have already changed in the 2 years since. When I think about my favorite part of Hood’s campus during my time there though it actually comes down to a tie. My first favorite thing about campus was how close everything was. The gym, dining hall, dorm buildings, library, and classes were all a 1-2 minute walk away from each other. It was great for the convenience of rolling out of bed shortly before class was supposed to start but also just for seeing and meeting up with friends around campus.

I think my other favorite part of campus was Gambrill gymnasium, the old gym on campus next to the science building. It was my favorite part for one reason alone. Late at night during the Winter and Spring, all the guys on the soccer team along with friends of ours who wanted to join would play pick up soccer on the basketball court. Some nights we’d start at 9 p.m. and maybe not even leave until 1 a.m. It was a lot of fun and a great way to relieve the stress of school. It’s definitely something I miss now that I graduated.

What are some things you like to do outside of work?

When I am not working I am usually coaching soccer. I started coaching my senior year of college in a volunteer capacity and that has now blossomed into a few coaching jobs around Frederick County. I am currently the JV boys soccer coach at Middletown High School and a member of the Varsity staff. I also coach two boys club teams for FC Frederick, a local soccer club here in Frederick, as well as help coach the college summer team run by the club. I currently hold a USSF Coaching D License and I have plans to obtain my C License within the next year.  In addition to all of that I also manage a men’s league team that I started called Blue Side FC, we are sponsored by the Blue Side Tavern in Downtown Frederick! It takes up a lot of my free time but when I’m not doing anything soccer related I am usually just hanging out with my friends, riding my bike, or relaxing at home.

What is something most people don’t know about you?

I like being an organizer and taking on fun challenges. When I was still in school I used to host an annual summer pool basketball tournament back in my old neighborhood at my parents house. There would be eight teams in the tournament with 3 players per team playing full court pool basketball. There would be round robin group play to determine seeding and then a double elimination knockout style bracket after group play. I would buy prizes and trophies for the winners and it was an all day thing. It was basically something I decided to do on a whim, and logistically speaking it took a lot to coordinate it all by myself, but it was worth it.

How do you like working with the Apollo Marketing team?

I feel very lucky that I got such a great job where I get to work with such awesome people. The work environment at Apollo is spectacular and it truly makes coming to work everyday enjoyable, even Mondays! Aside from everyone being nice and fun people, everyone looks out for each other and is always willing to lend a helping hand in the workplace which is very reassuring and makes working here that much better.

What is the best advice you ever received?

To not be afraid of failure. I’m not sure if this is the “best” advice I’ve ever received but it is certainly the advice that has stuck with me the most. It is important to not fear failure because those who fear failure will never really try in the first place. It’s a cop out, if you are afraid to fail and don’t try because of it then when you inevitably do fail you can just say, “Oh well I wasn’t even really trying anyways so it’s okay.” The only way to actually evolve as a person is to understand that failure is a stop and not a destination. If you’re afraid of failure then you’ll never really try your best and you’ll never really grow.