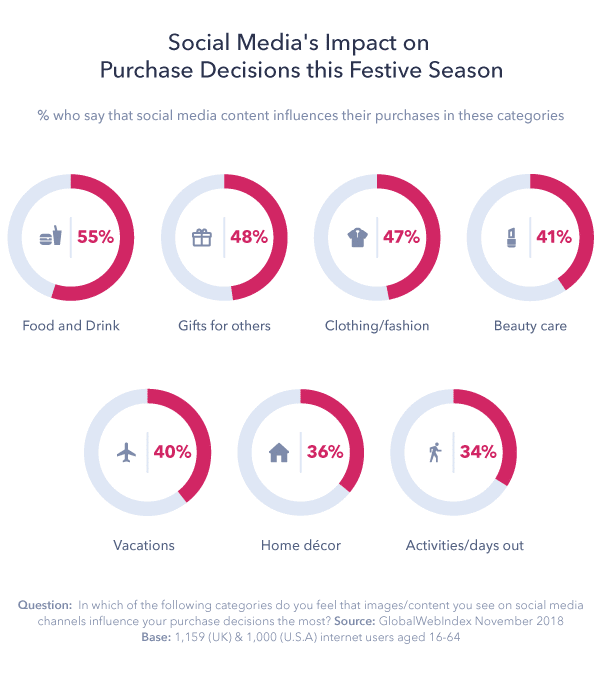 I know it’s a new year but I want to throw it back to the holiday season to examine a few things. I found a chart on Globalwebindex.net that looks at social media’s impact on purchase decisions during the holidays. Even though the holidays are over I think a chart like this gives great potential insight to peoples purchase decisions in general. We’ve looked at data revolving around social media before and there is always something to be taken from it.

The question asked was simple. In which of the following categories do you feel that images/content you see on social media channels influence your purchase decisions the most? The categories were food and drink, gifts for others, clothing and fashion, beauty care, vacations, home decor, and activities. 1,159 UK internet users and 1,000 US internet users all between the ages of 16 and 64 were surveyed in the month of november to collect the data.

For the most part the data isn’t a surprise and somewhat speaks for itself. It isn’t a shock that food and drink came out on top with 55% of people saying they were influenced by social media content. I mean, how many times have you seen a food ad or an instagram photo of amazing looking food and gotten really hungry because of it.

Food and drink purchasing is also a sort of impulse buy in comparison to other categories on the list. When you are hungry and want to eat out then that is what you do, you go and buy food. You don’t really sleep on the decision like you would for items like clothing and other tangible products. If you’re a restaurant or a bakery or any place that serves food, social media should be your biggest friend! You want to be visual too, the more pictures of your delicious food the better. That may go without saying though.

The next part of the data is where a little nook comes in to play. The second highest category impacted by social media was gifts for others at 48%. The thing about this category though is that all the other categories in the data could technically fall in to this one so long as your buying those items for another person. What does this tell us? Well maybe when you frame your product advertising in a way that encourages people to purchase gifts for someone else rather than themselves that may be more successful! Seems straightforward.

Now one could say that the only reason this worked and the numbers were high was because it was the holiday season and people always feel particularly giving during that time of year. Which is more than likely pretty true, but why not try it out during other times of the year? Start gearing your advertising towards buying gifts for others and see how it does for you. It’s always good to shake things up and try new things to see if they stick. You never really know what might work!

There might just be something there that clicks in people’s brains. Some people will deliberate forever about buying themselves something for $20 but will drop $30 on a friend right away. You see a lot of similar strategies around Valentine’s Day early in the year so it isn’t just always the holiday season. Also, people have birthdays 365 days a year. There will always be people looking to buy gifts for someone in some capacity.

Like we said before, the data in the chart doesn’t exactly reinvent the wheel. The numbers make sense and there isn’t anything that jumps out as crazy. But there are always things to be learned in any type of data, no matter how clear it might be!